Home
Products
About Us
Factory Tour
Quality Control
Contact Us

The radiator fin machine is able to produce copper wavy fins (1-4 rows) in a rolling mechanism. The copper fin is used for

Detailed Introduction
1) magnetic powder brake: equipped on the decoiler frame. The decoiling speed is controlled by the resistance force of the magnetic

powder brake.
2) decoiler: The coil tray supports the coil and it can tighten or loosen the tray by adjusting the tray claw. The changing resistance value

of the potentiometer automatically controls the resistance force of the magnetic powder brake. When there is an emergency, the decoiler

can be stopped immediately.
3) feeding resistance adjustment structure: the fin making machine is set with an automatic feeding system. The damper controller controls

height can be micro-adjusted by changing the working pressure of the cylinder. The strip run-out detection mechanism could cut the power

supply of the whole machine when the Aluminum/Copper strip runs out.
5) fin lubrication device: consisting of upper and lower oil chamber and oil immersing felt. Before entering the fin forming unit, the two sides

fin pitch correction device.
11) fin conveyance device: the device is controlled by a stepping motor and a worm rod to convey the finished fin and count the fin

convolutions at the same time. When the fin convolutions has met the set value (i.e., the fin length), the stepping motor stops and PLC

controls the cutter to cut off the fin. The fin is cut at the fin crest.
12) worm rod: the choice of the worm rod is decided by the pitch of the fin. Different fin pitch should work with different worm rod.
13) blockage detection device: consisting of motor, detection probe and isolation block. The electrode works with DC 24V voltage. This

blockage device is installed at the exit side of the fin forming unit. When the electrode probe detects a blockage, the control loop power is

cut off, and the motor is stopped immediately to protect the fin forming unit.
14) cutter: consisting of cutter stand and dual-direction adjustable buffer pneumatic cylinder. There is a 2-position 5-direction valve to

control ON/OFF of the cutting cylinder.
15) oil spray mechanism: consisting of solenoid valve, vacuum generator, and pipes. The vacuum generator draws the volatile oil of the oil tank by ON/OFF of the solenoid valve and then spray the oil mist on the blade rollers for lubrication.
16) The working table of the fin forming unit is made of Aluminum/Copper material. And the fin forming unit is made of an organic glass cover. 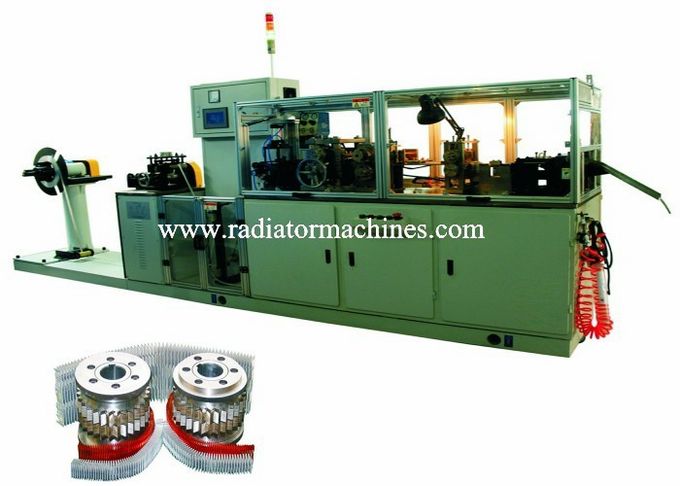